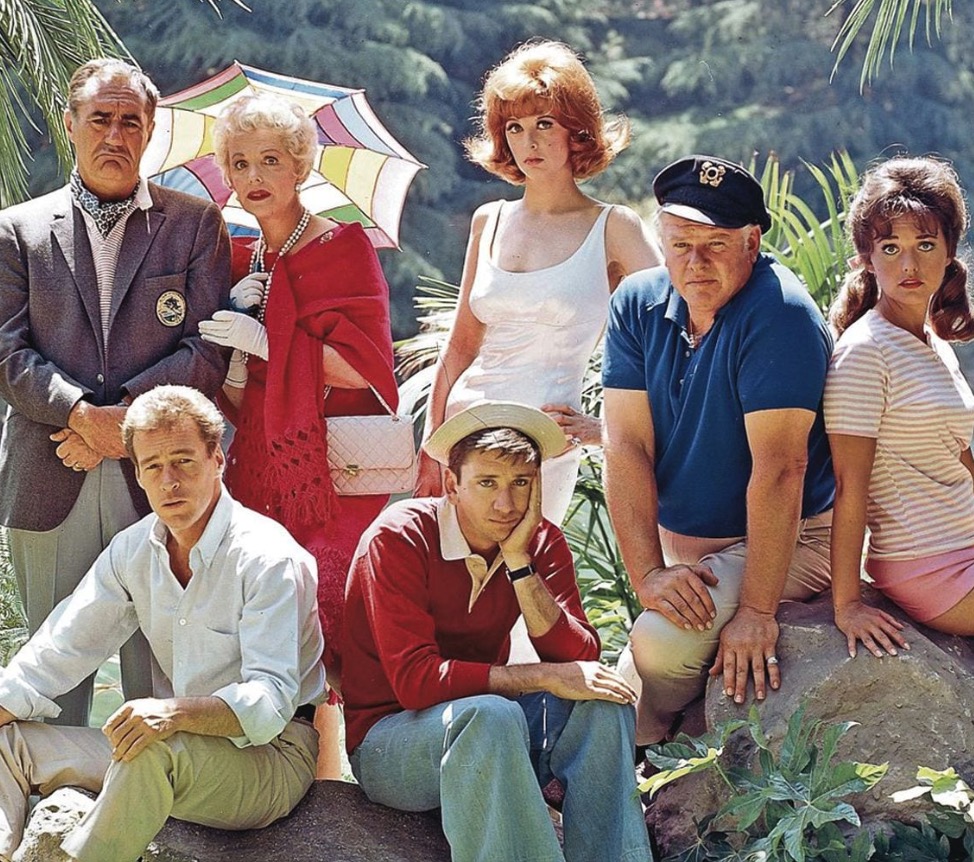 Perhaps one of the most classic and timeless television shows to ever grace television sets throughout the United States, Gilligan’s Island captivated the imaginations of audiences over the course of several generations.

The show was so popular that they were able to get the biggest stars of the day to come on and play roles. It only lent credence to the fact that this was such a unique, one of a kind show that they were able to get actors and actresses who have become cultural icons to come on and perform. In addition, there are more than a few famous actors today who got their starts on Gilligan’s Island.

So what have the castaways been up to since they got off of the island? We wanted to see where these American cultural icons went upon their arrival back on the mainland, and as it turns out…

Tina Louise as Ginger Grant – Then

Ginger was a famous actress in the world of Gilligan’s Island who decided to go on a pleasure cruise in Hawaii. While she may have been known as quite the priss, she was always there for her fellow castaways, willing to sing or entertain them in order to keep morale up. Her character was known for having elegant and bright clothes, and people have wondered throughout the decades why she brought so many gowns for a simple pleasure cruise.

Tina Louise currently lives in New York City and continues to perform, primarily in musicals on Broadway. In addition to acting, Louise also volunteers in New York Public Schools where she helps to tutor and teach children in the second grade. On her first day of volunteering she was shocked when the majority of the students immediately recognized her as Ginger due to all of the Gilligan’s Island reruns. Louise has also written a book of memoirs, titled Sunday, about her time in boarding school.

Mrs. Lovey Howell is the wife of multi-billionaire Mr. Howell. She is basically a walking, talking caricature of what the upper crust of New York Society acted like in the 1960s. However, Mrs. Howell did indeed have depth, and was not entirely vapid and money hungry. She loved to host and have parties on the island, and she also tried to be the islands matchmaker, attempting to set up Gilligan with Mary Ann, and Ginger with the Professor.

Like many actresses of her time, Natalie Schafer began her acting career on Broadway, taking on roles in 17 plays between the 1920s and the 1950s. She then went on to concentrate in film, being typecast as vain, wealthy women. Natalie Schafer sadly passed away in 1990 at the age of 90 years old, and bequeathed a good portion of her wealth to the Lillian Booth Actors Home. The home is an assisted living facility for retired actors.

Bob Denver as Gilligan – Then

William Gilligan was the main character on Gilligan’s Island. He was the first mate aboard the S.S. Minnow, and had served with the Minnow’s captain in World War 2, even saving his life from a depth charge. A child at heart, Gilligan was always goofing off, reading comic books, and just acting silly. While he was not very smart, he was always a warm and caring person, and he always tried to help out the other castaways.

Bob Denver never really struck it big with Gilligan’s Island, only getting residuals for his part for three years. He was typecast as Gilligan for years after, and continued to reprise the role for the various crossover shows as well as animated Gilligan shows which were created. Denver eventually went on to take on short roles in hit television shows such as The Love Boat, Fantasy Island, and Love, American Style. Denver sadly passed away from pneumonia in 2005 at the age of 70.

Alan Hale Jr. as The Skipper – Then

Capt. Jonas Grumby, otherwise known as The Skipper, was the owner and operator of S.S. Minnow before it got stranded on the island. He is a tough man who is always ready to take charge, while at the same time is known for having a big, warm heart. The Skipper served on various ships during World War Two, and throughout the war he came in contact with various tribes, learning their culture, and even adopting their superstitions!

Alan Hale Jr. was already quite a big supporting actor by the time he became a part of the Gilligan’s Island cast. Upon leaving the show, Hale took on roles in shows such as The Love Boat, Here Come the Brides, The Wild Wild West, Crazy Like a Fox, and many others. He also opened up a lobster restaurant in Los Angeles as well as a travel agency. Sadly, Alan Hale Jr. passed away in 1990 as a result of Thymus cancer.

Midori as Kalani – Then

Kilani was a native girl who was rescued from drowning in a lagoon by Gilligan. As a part of her tribe’s custom, Kilani pledged her life to Gilligan, promising to work for him for the rest of her life. Mr. Howell wanted domestic a domestic worker, so he tried to take her from him. In the end however, Kilani’s tribe came back to get her, becoming convinced in the process that Gilligan is a fire god.

There is not too much written about Midori’s background or history, and yet, she was still able to take on central guest starring roles in a wealth of famous television programs throughout the 1960s. For instance, Midori took on roles in shows such as Donovan’s Reef, Blood Voyage, The Boatniks, McCloud, Hangup, and The Red Skelton Hour. However, it seems as if Midori disappeared after the 1970s as there is so little information on her.

Kit Smythe as Ginger – Then

Ginger was a movie star throughout the series, however, during the pilot episode, she was someone much different. In fact, Ginger was actually a common secretary when the show’s pilot first aired. It was only in the later episodes after the series was picked up by CBS, that Ginger became the prima donna who we all know and love today. It certainly would have been interesting had she remained a secretary throughout the show!

We all know Tina Louise as Ginger Grant, but in the pilot episode it was actually Kit Smythe who played the (now famous) role. Smythe has been in a variety of shows and movies, and took on roles in shows such as Burke’s Law as well as Police Woman. She was also married to Denny Miller, a Bloomington, Indiana born basketball player as well as actor, famous primarily for being the first ever blond Tarzan.

Mel Blanc as Sam the Parrot – Then

Sam the parrot was a parrot left on the island by a group of bandits some decades prior. He was found in a cave on the island, and was found to be able to imitate any and all voices. illigan eventually made him into a pet of sorts, but Mr. Howell had only one thing on his mind – where the bandits hid the loot. So, Mr. Howell got the bird to show him where the “loot” was. However, treasure is in the eye of the beholder, and Sam’s “treasure” was actually a pack of crackers!

Mel Blanc played the voice of Sam the Parrot. However, he is perhaps best well known for playing the majority of the characters on Looney Toons, including Bugs Bunny, Tweety Bird, Porky Pig, Daffy Duck, Foghorn Leghorn, and many others. Known as the man of 1,000 voices, Blanc was known as the “most prolific voice actor in history.” Blanc passed away at the age of 81 from coronary artery disease. But he had the last laugh. engraved on his headstone is Porky’s famous saying; “that’s all folks!”

Zsa Zsa Gabor played the socialite Erika Tiffany Smith in an episode of Gilligan’s Island. A very wealthy socialite, she was sailing around the south Pacific looking for a place to build a resort when she happened upon the castaways. As it turns out, Erika knows the Howells (and she is one spot above Mrs. Howell in the NYC Social Register). Erika promises to send help, but forgets to write down the coordinates of the island, and gives the US Navy notes written in Hungarian!

Zsa Zsa Gabor began her career as Miss Hungary in 1936, and immigrated to the United States during World War II. She was a very prolific actress both on stage as well as on the big screen, and had multiple cameos in dozens of television shows. However, she is perhaps most well known for her extravagant lifestyle, and the fact that she was married nine times over the course of her life, including Conrad Hilton of the HIlton Hotel empire and Jack Ryan who designed the first Barbie Doll.

Kurt Russell as The Jungle Boy – Then

One day, Gilligan found a small boy living in the jungle. However, he was unable to tell the castaways how he got onto the island or anything about himself. In fact, the only words he was able to say were the last few words someone said to him. The Jungle Boy showed the castaways a huge natural gas field on the island, and they immediately got to work trying to build a balloon. However, the jungle boy escaped on the balloon, leaving the castaways stuck.

Kurt Russell played the Jungle Boy on Gilligan’s Island and then went on to grow up and do great things in film and television. He even managed to be nominated for a Primetime Emmy Award as well as a Golden Globe. Russell has appeared in a good amount of famous movies, including Vanilla Sky, Bone Tomahawk, The Hateful Eight, The Fate of the Furious, and Guardians of the Galaxy Vol. 2. Kurt Russell also received a star on the Hollywood Walk of Fame in 2017.

Mary Ann is a sweet girl from Kansas who was a main character on the show. She was the best cook out of all of the castaways on the island, and was the one they all went to when they needed some encouragement. She is also the one who takes it upon herself to do the majority of the chores around the island. There were always rumors that Mary Ann had a crush on Gilligan, but it seemed as if Gilligan did not notice.

Dawn Wells got her start in acting after winning a scholarship to study the art by coming in first at a Miss Nevada beauty contest. She then went and studied theatre at the University of Washington, graduating and moving to Los Angeles afterwards. Wells is known for being the first person to wear short-shorts on national television, and for playing Mary Ann in every iteration of Gilligan’s Island. Dawn was also the only member of the cast to make sure she received royalties for Gilligan’s island.

5 actors who should play Robin opposite Robert Pattinson’s Batman

There’s only one person we love more than Batman, and that’s Robin. He’s the underdog, the ...

Great movies that were based on Agatha Christie novels

Agatha Christie is one of the greatest crime novelists of all time. Her stories are celebrated all ...

Are the X-Men really joining the Marvel Cinematic Universe?

Disney has been busy, this time it’s because they’ve successfully bought out 21st-Century Fox, ...